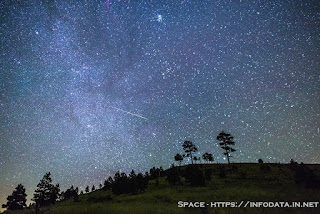 Space at a glance:

In night sky we can see many stars with our naked eyes. Most of that are from our Milky-way Galaxy and very few are from another galaxies. With very advanced telescope like Hubble telescope or Kobi satellite we can see fur deepest stars or galaxies. In our Universe it is predictable that there is around 125 Billion (12,500 Crore) Galaxies present. In every Galaxy, there are around 200 Billion (20,000 Crore) Stars. In our Universe every time there is creating the stars and also destroying. At the time of destroying the particles from the dead star spread all over the space as a form of gas and dust. And from this gas and dust, new stars are forming. Around 5 Billion (500 Crore) year ago by the collision of stardust particles and gas which was spread over 15 Billion (1500 crore) Sq Mile, our Solar system forms. The space scientists well said "We are made from Stardust".

Formation of our Universe:

From the beginning of this universe, Hydrogen was core of everything. After burning inside the star for too many times, hydrogen changes into Helium. But when there is no fuel remains for burning, the star explodes/expends and vanishes into the deep space after emitting stardust, gas and light(in form of photon). The giant stars form Supernova at the time of destroying, but our sun is so small in size. So its death will be silent. The stars which are eight or nine times bigger then our sun, forms Supernova and which are bigger at-least twenty five to thirty times can form Black Hole.

If any star or matter comes nearby any Black Hole, then it attracts that star or matter into its center. At the time of sucking, by the light wave coming from that star we can identify existence of the Black holes. In every Galaxy, there are many Black Holes presents in the center of that Galaxy. Its attraction force holds Billions of Stars and Planets in that Galaxy. Even in our Milky-way Galaxy there are some Black Holes which keeps the stars including our Sun inside the Galaxy. Inside the Black Hole, the density is too high and except Hawking Radiation anything can not emit from this to outside, even not also light.

Evidence of the Theories:

We have also proof to satisfy the above theories. Astronomer Edwin Hubble, with his own telescope discovered our nearest galaxy Andromeda Galaxy (It was mentioned and described in a book which was written in around year 964, by the persian Astronomer Abd Al-Rahman Al-Surfi.). Following this after 20 years two scientists George Lamet and George Gyammor discovered, the whole Universe is spreading continuously. If that, so if we rewind the whole process, then we will find everything in this universe including the Galaxies, Stars, Planets, Asteroids will reach a single point, as Einstein called it 'Singularity'.  At this time there were not any rules in this Universe. If everything comes so closure, the temperature and density must increase, and possibility of getting blast will also will increase. Later British Astronomer Fred Hoyle names the Giant Explosion as 'Big Bang'. The meaning of Big Bang is Enormous Sound. But it is not possible for the sound to travel in Universe, but temperature can. In 1965 Arno Penzias and Robart Wilson discovered 'After Glow Microwave', which supports Big Bang Theory.

At this time the Golden Era for Space Research started. Every Country Started Institutions regarding Space science or Cosmology.

The Space program of the Union of Soviet Socialist Republics  (USSR) started in 1930s (although it was created for military purpose), NASA (National Aeronautics and Space Administration, USA) in 1958 and later ISRO (Indian Space Research Organisation) on 15th August, 1969.

Their main aim of every Space Program is to find the ancient source of our Universe and then to analyse for finding the truth "How everything was Started".

From the year 1957 when Soviet Union launched their first satellite to space, the real space race begins. Every countries want to be in the front of the race, but actually the race was between USA and Soviet Union. As stated above you can see the achievements at that time. But it did not last long. At the year 1985 the countries started mutual collaboration for space welfare. Next we launched International Space Station with joint collaboration of NASA(USA), Roscosmos (Russia), JAXA (Japan), ESA (Europe), CSA (Canada). Later some other countries also joined. Now many countries jointly collaborating for space research or space exploration.