Indian Railways (IR) is India's national railroad framework worked by the Ministry of Railways. It is controlled by the legislature as an open decent and deals with the fourth biggest railroad organize on the planet by size, with a course length of 67,415 km (41,890 mi) as of March 2019. 34,319 km (21,325 mi) or 50.90% of the considerable number of courses are energized with 25 kV 50 Hz AC electric footing as of March 2019.

In this article we will know how this engine was made, it's characteristics, it's speed, which batteries is required, how will that be charged and why we need this technology to Railways. 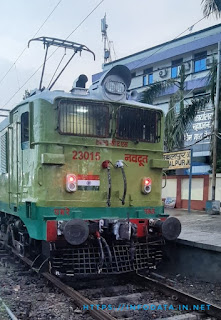 WCAS loco is not a new loco which is battery operated in Indian Railways. 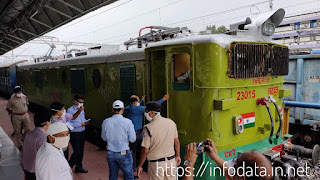 Earlier we already seen many battery operated locomotive  as shunting locomotive but they were not so popular as this technology was never gets media coverage.

The name of the locomotive is WCAS. Where W= Wide Gauge, C= DC(Battery), A= Ac power, S=Shunting
It is remaked by WAM4, so all the specifications for this loco is same.

Need of the Locomotive

Let's look at the points for which we need this locomotive
The shade where the trains coaches/locomotives came for maintenance, there the workers need to work on the roof of the coaches/locos too. So it is dangerous to use 25 KV High tension wires to supply the power for the Electric Locomotives. So till now we ware using Diesel Shunting locos to bring the old coaches/locos to inside the shed although it produces smoke inside the shade and also making pollution and more specifically the diesel engine burns diesel which costs more to Indian Railways. But if there is electric OHE (Over Head Wires) it is limited to 40% of the area only.
For maintenance purpose the locomotives or defective coaches they can be lifted with help of crane insert the loco shed. If there is OHE, then we can not use the crane.

the batteries which were used in the coach is not the same which is used in our household. Ni-Cd (Nickel cadmium) batteries are used there, which doesn't require too much maintenance and take less time for charging also it provide High voltage. The battery remain charged for too many times without being used. The voltage of individual battery is 3.6V and 130 batteries in a pair is used to supply the power.
Read more: 18 things which we learnt during lockdown! Number 4 will make you laugh.
It's drawback is less efficiency, only 60%.

Charging of the batteries

The batteries are charged by the pantograph when contacted with the OHE. It takes charge from the overhead wires and supply it changes the batteries.

It can run upto 100kmph while in connected with OHE/Batteries. But the batteries can give backup for only 10km. It have low horsepower, so it's using for shunting only.
Last Modified on 10th jult, 2020 by Rajat

Indian Railways running on battery! | WCAS Locomotive Rajat 2020-07-10T04:50:00+05:30 5.0 stars based on 35 reviews Indian Railways (IR) is India's national railroad framework worked by the Ministry of Railways. It is controlled by the legislature as a...
Share this with short URL Get Short URL
Railways